Levi E. Coe was born June 6, 1828 in Middlefield, Connecticut. He was the fourth and youngest child of Colonel Levi Coe and Sarah Ward. He was educated at the common schools and Post Academy and Chase Academy.

He became a teacher at the age of eighteen and taught for seven years. He married Sophia Hall on Thanksgiving Day in 1851.

In the fall of 1853, the Coes moved to Meriden, where one year later Levi Coe was elected treasurer of the Meriden Savings Bank. He was eventually elected president of the bank, a position he held for many years. He was an officer and active leader in many town and state agencies. He was also a judge for many years in the probate, city, and police courts of Meriden. 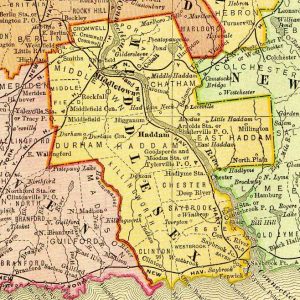 Levi Coe donated the library building, its contents, and the land to the townspeople of Middlefield on June 6, 1893.

On the occasion of the library’s dedication, Judge Coe observed:

“The Legislature has granted you an act of incorporation. You have honored me by connecting my name with the name of the association. This property is today to pass from my control into the hands of the association [to] be set aside for social, intellectual, and benevolent purposes.

“By your social gatherings here, by your reading clubs and literary exercises here, by your industrial education and benevolent work here for the unfortunate and needy, you will be made better men and women, and the organization a helpmeet to all that is good. It is with great pleasure that Mrs. Coe and I, by industry and frugality, have been enabled to do this much for our old home, the town of our nativity. If you derive as much pleasure and profit from it as the donors have in preparing it, they will be fully repaid for the undertaking.

“And now as a thank-offering to Almighty God for His many blessings, and in loving memory of dear departed friends, Mrs. Coe and I present to this association for the use of the inhabitants of Middlefield, this library, this lot, this building, and the furniture and fixtures herein.”

Levi Coe maintained a great interest in the library that bore his name. He donated books from his personal collection to the library and each year until his death spent $100 on the purchase of new books. Levi E. Coe died on November 2, 1903.

The library was originally open on Saturdays from 2:00 to 4:30 P.M. The librarian was paid $1 per month. When the hours were extended to include Wednesdays from 1:30–4:30, the librarian’s salary was increased to $2 per month. The janitor was paid 50 cents each time he started a fire in the old pot-bellied stove. Levi Coe donated $100 worth of books each year and the state of Connecticut made a matching gift of books. By 1904 the library’s collection consisted of nearly 300 books.

Today, the library houses over 25,000 volumes and is open 40 hours per week. As Levi Coe wished, the library continues to be an educational, cultural, and recreational resource for the residents of Middlefield.